All passionate foragers have their spots where they know certain herbs and medicinal plants grow, and I have mine.  One of those is my spot for mugwort (Artemisia vulgaris).  Along the edges of a large field full of tall grasses that abuts part of the Quinebaug River Wildlife Management Area, mugwort grows prolifically.  I could pick as much as I could possibly need and then some. I’m happy to say that it won’t be long now before I’m there again harvesting this beneficial and magical plant. 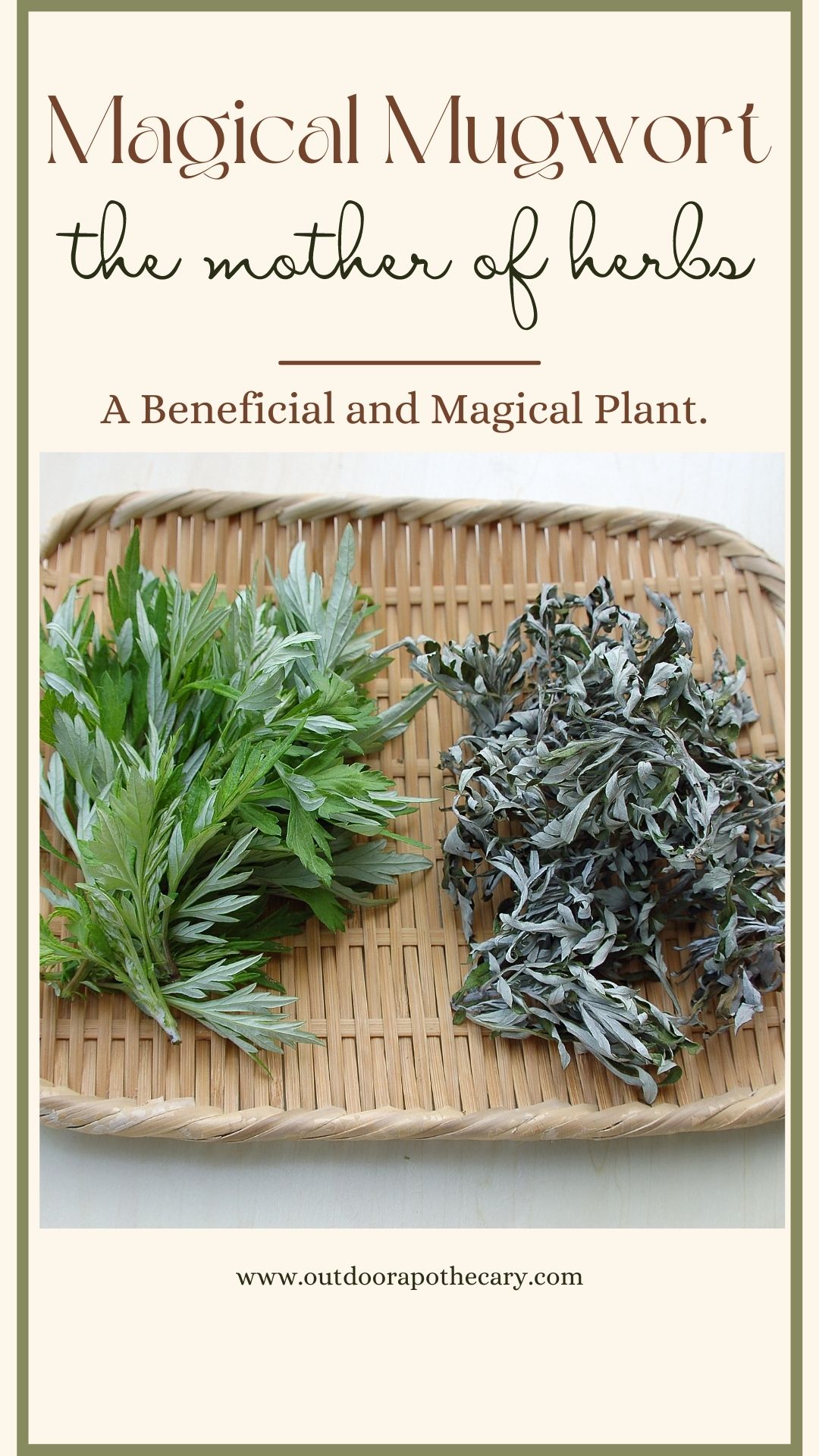 Mugwort is a species of flowering plant in the daisy family Asteraceae. It is one of several species in the genus Artemisia commonly known as mugwort, although (Artemisia vulgaris) is the species most often called mugwort.

Many people who see this plant growing, think it’s just a weed, but we herbalists and wildcrafters know better. Mugwort is a stately, self-assured perennial plant that can reach heights of over six feet. Its tall summer presence is found in many locations, ranging from waysides, roadsides, waste grounds, and between forests and fields. Its magical, culinary, and medicinal properties have been known and valued by cultures throughout history.

According to tradition, mugwort was known as the witch’s herb and aptly renamed by some as cronewort. Historically, it was placed by the door of the local witch, healer, and midwife. It was also used as a symbol that would be hung on the door or planted outside.

Its scientific name, Artemisia, may give us a clue as to the powers of this herb. Named after the Greek moon goddess Artemis – who was known for her patronage of women in all phases of their lives, especially at the onset of menstruation, in childbirth, and during menopause – it is easy to see what uses this herb has.

This plant has earned the title “mother of herbs” for its use in treating female reproductive disorders and for regulating menstrual cycles. Some people call it ‘the old woman’ and consider it to be a manifestation of ancestral wisdom and feminine qualities.

In shamanistic cultures, it was used to facilitate communication with ancestors and the spirit world; people drank it as a tea or tonic at bedtime or placed bundles of the herb under pillows to induce lucid dreams.

In medieval times, this herb passed from the pagan goddess Artemis to the Christian saint John the Baptist. The saint carried the herb into the wilderness with him to ward off evil. This led to “St. John’s Girdle” and the wearing of a mugwort garland on St. John’s Day while dancing around a ceremonial fire. The garland would be tossed into the fire to ensure protection for the following year. In some places, this ritual is still performed today.

“There is no herb that I know of, more imbued with folklore and superstition than mugwort, a plant for which I have a deep affinity likely due to my belief in the magical properties of plants. It is an ancient magical herb with curative and divinatory properties, bearing a special value in feminine disorders and warmly strengthening the body”.

Knowing how to identify mugwort’s leaves, flowers, and stems can help you confidently identify them in the wild.

Leaves: The plant’s leaves are a strong identifier. Leaves are 1 to 4½ inches long, up to 3 inches wide, and deeply divided into finger-like, wedge-shaped lobes along the central vein. They are hairless on top, but they have a silvery-white, downy underside. If you are familiar with the smell of sage, the plant should smell similar.

Flowers: Flowers consist of small, yellow and reddish-brown heads that sprout from the upper parts of the plant in branching clusters. The flowers have seven to ten pale yellow thread-like pistils extending from the center. The stems, stalks, and bracts are light green from a covering of frosty hairs.

Stems: Multiple reddish-colored stems grow from the ground, smooth and unbranched in the lower plant, but becoming much-branched with short, matted hairs in the flower cluster.

Mugwort has several look-alikes.  Two of the most common here in the Northeast are wormwood and motherwort.

People often confuse mugwort with wormwood or use the names interchangeably thinking they are the same plant, when in reality mugwort (Artemisia vulgaris) and wormwood (Artemisia absinthium) are two different herbs from the same family, the Artemisia genus.

One way to tell them apart is to look at the leaves. Mugwort leaves are green on the top and white underneath, with pointed tips and purplish stems, while wormwood leaves are silvery on top and bottom, with flowers that are much showier. Also worth pointing out is wormwood is the main ingredient in the infamous drink absinthe.

Motherwort and mugwort plants are similar in appearance, but distinct characteristics set them apart. Mugwort leaves are white-woolly and almost silvery on the underside, while motherwort leaves may be slightly hairy and will be the same color on top and bottom.  Motherwort has its own folklore and history of medicinal use for heart ailments.  Additionally, it was used to remedy nervousness, dizziness, and other disorders of women (an interesting addition to the garden I think).

Mugwort can improve appetite, digestion, and nutrient absorption when taken for long periods of time at low doses. It eliminates worms and stimulates the uterus to bring on delayed menstruation and ease menstrual cramps. It is an antiseptic and has been used to treat malaria.

It is also antibacterial and antifungal, and it can be applied topically to relieve itching and burning. It is said to help with rashes, poison oak, and many other skin disorders. Mugwort would make an excellent ingredient for an herbal salve.

It is also used in summer to keep insects away, to repel moths from our clothes, and to banish negative energy from our living spaces.

Mugwort is edible and can be eaten fresh but is more popularly used as a spice or flavoring agent. It is commonly put in soups, meats, and stews. Mugwort has also been used as a flavoring in beer before the introduction of hops.

Mugwort can be made into tea by adding 1 to 1  1/2 tsp. of dried mugwort to a cup of boiling water and steeping for 10 minutes. While there is no recommended dose of mugwort in any form, I wouldn’t recommend any larger dose until you know how your body reacts to this herb.

Do not use mugwort if you are: allergic to birch, kiwi, peach, mango, apple, celery, carrots, cabbage, grass, hazelnut, olive pollen, honey, mustard, royal jelly, sweet bell pepper pollen, tobacco, and sunflower, if under 18 years of age or pregnant.

The hallucinogenic properties of Mugwort are slim to none, but caution should be exercised due to its ability to enduce lucid and vivid dreams and even sometimes trance-like half dream states.  These dream states induced by mugwort can be so vivid that they can have the same damaging psychological effects one would get from hallucinogenic drugs or items known to cause vivid hallucinations.

Disclaimer- I am not a medical professional. All information shared here is for information and entertainment only. Do your own research and consult your health care provider before treating yourself with any product, plant or mixture. 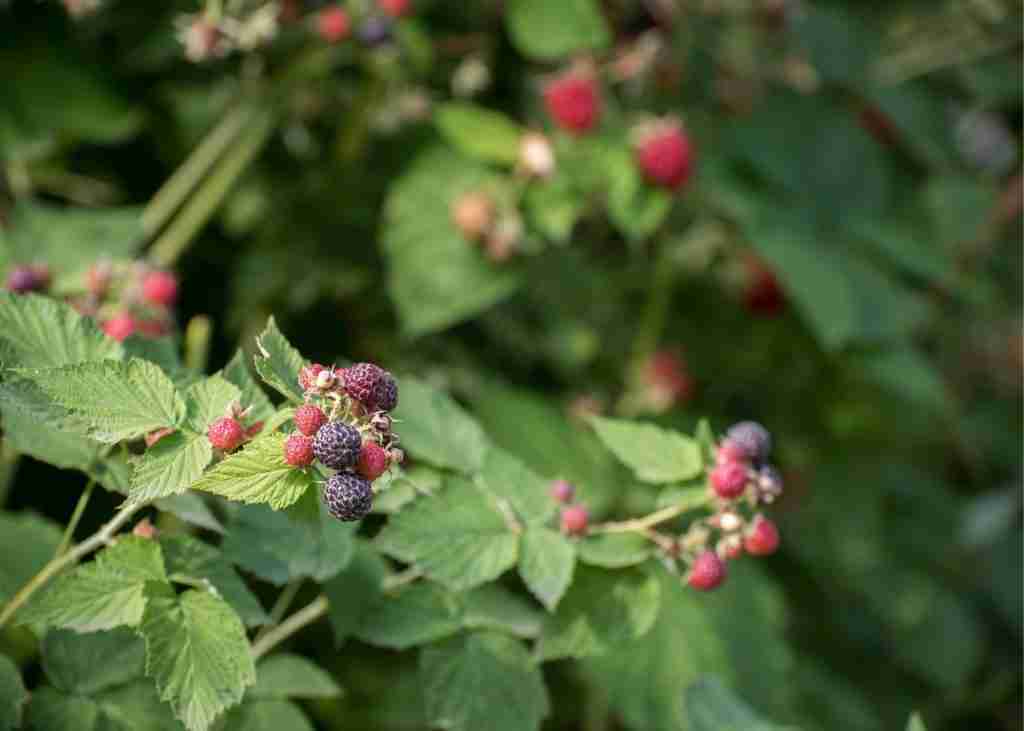 1 thought on “The Magic of Mugwort, the Mother of Herbs”